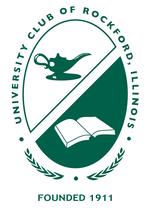 A HISTORY WORTH CELEBRATING!

​Unverified accounts report that prior to 1905 several gentlemen from Chicago arrived by horse and buggy to suggest that a University Club be formed in Rockford. The trip reportedly took about a week each way. Several years passed before enough interest was generated.

Mr. Warner Hays, a Yale man, is generally credited with providing the impetus for forming the Rockford University Club. It was he who gathered “a few of the boys” together for early informal meetings at the Thadwa Café, located on North Wyman Street in the Florence May Building.

Biggest social flings of each year were the annual formal New Years Eve Ball, held in the old armory in the 100 block of North Church Street and in the Nelson Hotel, and summer excursions aboard the good ship May-Lee to the picnic grounds on the Rock River where Loves Park now hugs the shore.

​The first annual dinner for the University Club was held February 3, 1911, in the “New Mendelssohn Hall,” located in the 100 block of North Main Street where the downtown offices of the Phone Company now stand. The following cover story, appearing in the Rockford Morning Star the next day, tell a little about what went on the night before:

“Probably no other gathering of the same men as were present last night would have produced the flow of spirits that effervesced throughout the evening, though many of the boys were gray and some had lost their hair… college yells began, a group from one school giving its yell and then another followed until every school in the country, of any pretensions, had been represented… college songs followed between courses and everybody joined in these with more or less musical ability…”

At one time or another the Club met in such places as the Christian Union Church which was loaned for the purpose by Dr. Charles Parker Connolly, the Elks Club, the Trust Building, and the Lafayette Hotel. Usually these were monthly meetings with a speaker of interest.

​In 1926 there was talk of acquiring a permanent home for the Club. Among the homes considered were the Wait Talcott home on North Main Street for $60,000.00, and the Ralph Hinchcliff home at 205 Mound Avenue for $40,000.00. Both were judged too expensive to maintain.

​On June 7, 1928, the University Club moved into its first home—space vacated by the Mid-Day Club on the second floor of 311 West State Street above the F. W. Woolworth store. Later, on May 18, 1931, the Club moved to the newly completed Gas-Electric Building and occupied the entire top (8th) floor. Then, on November 29, 1939, the Club leased the Duncan P. Forbes home at 945 North Main Street for its quarters. After extensive remodeling, the Club moved there on March 20, 1940. An open house, chaired by Bob Nethercutt, was held for the members and their wives on March 31, 1940. The Club then, also provided rooms for Rockford’s bachelors. Room rentals were discontinued in 1968. One reason for discontinuing room rentals was a request by the Fire Department that fire escapes be added for safety of the renters. Rather than deface the building, The Board chose to discontinue rentals.

​The Club was thirty-seven years old when it secured a home of its own. In 1945, a group of members decided to purchase a home “for the Boys who were serving their Country to come home to.” A Building Corporation was formed and, through the selling of bonds, the Forbes Home that the Club was leasing was purchased in 1948. Senior members recall the “several one-armed bandits” located in the bar area that helped pay off the mortgage. The Club’s most famous dish was the cowfl--, introduced by Leroy Hill in the late 1950s. The cowfl--, a super omelet was available only on Saturday mornings. With the passing of Florence, our cook for more than 40 years, the recipe was lost. The Club logo was designed by Walt Shafer about 1966. The University Club is built on land from a patent issued by President Polk in 1843 to George Haskel. In 1846, Haskel sold the land to James Taylor who then sold it to Elizabeth Martin in 1851. The land changed owners seven more times before it was sold to Henry Favis Forbes in 1892 for $12,000.00. The land was then willed to Duncan Forbes when he reached 25 years of age on August 26, 1921. Duncan sold the land and building to the University Club in 1945 for $30,647.00.

​Subsequent remodeling added probably the first squash court in Rockford. The Game Room was built above the squash court in 1960 and the Dining Room was added in 1961. Old-timers may remember the old Dining Room (now the Bar Room) and the old horseshoe-shaped bar which was so dark that a patron could sit unnoticed for hours (now the kitchen and the old kitchen, is now serving as a storeroom and restroom). On January 3, 2007, during the annual meeting, the membership approved plans to remodel all floors at the club, including the heating and cooling system and an elevator to serve all floors of the club, with the challenge to preserve the historic look of the Club. Cost of all remodeling was approximately $800,000.

Remodeling started in January 2007. Cosmetic changes were done to the living room, dining room, and the bar area was enlarged. In the basement, a new women’s locker room was built. On the second floor, the office and men’s restrooms were remodeled into larger meeting rooms. A new business office was moved to the remodeled third floor. New work was done in the kitchen. Today, after many renovations, the same building still serves as the Club’s quarters.

On July 4th, the celebration continued with the Fourth of July cookout and a children’s essay contest themed “What the flag means to me” followed by the dedication of a white oak tree (planted earlier in the spring) as a permanent memorial.

​A centennial dinner on September 15th, featuring a menu closely resembling the original dinner served on February 3, 1911 was oversubscribed and was duplicated the next night. The program was a narration by Gordon Geddes on how his Grandfather-George Purdy came to the U.S. and eventually Rockford, to serve as President of Greenlees. Allen Pang told many anecdotes of the University Club, such as how we became a key club, the year of the cock party in 1969, the effort by a group of members to move the club to the East side, a member murdering his mother and many other club incidents not mentioned in our history.

​Bill Condon has been asked to fill the vacancy on the University Club Historical Committee. Bill has been a member of the Rockford Historical Society and has visited both The Milwaukee and Madison University Clubs. Bill will join Allen Pang and Dick Rundquist on the committee.

Where 150 men attended that gala first annual dinner in 1911, the University Club membership today totals nearly 330, not counting those holding associate status. Luncheons are served daily, Thursday and Friday nights are family nights. There are frequent Club functions throughout the year, and during the summer the Club pool is a Mecca for the next generation of U Club members.

Many members do not know when, where, how , and why the University Club was started. Many members have requested that this information should be gathered now before it is lost forever.

This is not a complete history. It is our hope that when this article is included in the Club
Directory and distributed to the membership, some member or a former member’s widow may provide further light. We need information about the men that came out from Chicago prior to 1911 to help start the University Club. Also the names of some of the former presidents. Original Historical committee formed in 1960 consisted of Bob Nethercutt, Walt Shafer, and Allen Pang. Walt passed away in 1968 and Bob in 1980. Richard Rundquist was appointed in 2008 and passed away in 2013. Bill Snively was appointed to the committee in 2013.